In high school, I got interested in electronics tinkering through the blog Hack-a-Day. I haven't done much myself for many years, but I still read the blog, and last week there was a post that seemed ripe for physics analysis:

The setup is that each player has a button they can press and release. While the button is pushed, a capacitor is charged by a voltage source, and when it's released, the capacitor switches to power a motor that drives the horse. You can see the full plans here, but this is a simplified version of the circuit:
In the state shown above, the voltage source (V) begins to charge the capacitor (C). At first, this would act like a short circuit, so we add a resistor (R) to limit the current flow. For this type of circuit, the charge on the capacitor is given by

The voltage over a capacitor is proportional to the charge stored in it, so as the capacitor charges up, it pushes back more and more on the voltage source, which slows the charge that's added. That leads to an asymptotic behavior: 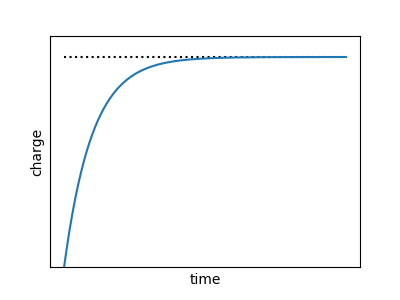 When the button is released, the switch in the diagram above flips to the other side of the circuit, and the capacitor begins discharging through the motor. This acts like a resistor, but converts the charge flowing through it to motion, driving the horse. Once again, we have an asymptotic relationship, since as the charge flows out of the capacitor, it can't push as strongly:

Here, Q0 is the amount of charge we put on in the first step. This is similar to the plot above, but decaying to zero: 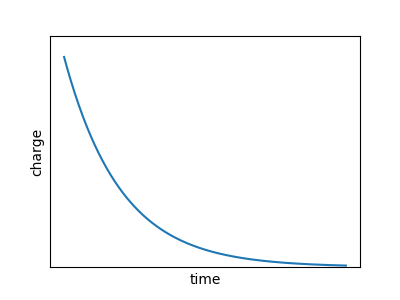 This made me curious if I could come up with the optimal strategy for getting the horse to the end as quickly as possible. That translates into the most charge in the least amount of time, or the maximum current. If we ignore the initial charge up, we can think of switching between some maximum and minimum charge: 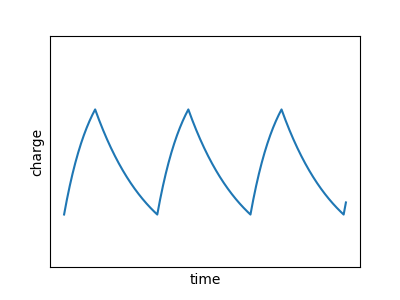 The average current through the motor over one cycle is

where tC and tD are the charge and discharge times. The expressions for those are a bit ugly, so I won't write them out here. Rather than try to get the exact maximum current, we can try a variety of values for Qmin/max: 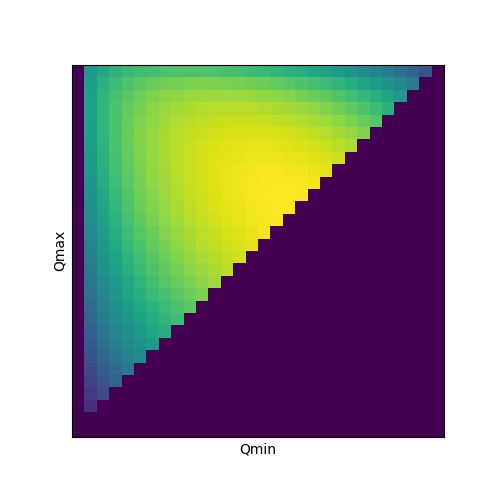 The best option appears to be keeping the capacitor at ~50% charge by rapidly flipping the switch between the two states. As with many games, the answer lies in hyperactivity!