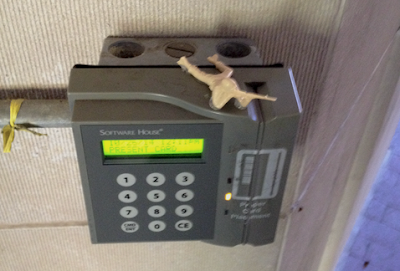 The University of Michigan is on break right now, which means I need my ID card to get into my office building.  It got me thinking about how the system is reading my card – Originally, the cards used a magnetic stripe, but a few years ago they swapped those for RFID, so I thought I'd look into how each of those works.

The magnetic stripe consists of a series of zones, where the field points up or down, corresponding to 1 or 0:

This is the same way hard drives store data.  A read/write head moves over the zones sensing and changing their field as needed.  This is why getting a powerful magnet near your card can scramble the data.  The stripe begins with a start pattern that tells the reader how fast the card is moving, so changing speed mid-swipe can also cause an error.

RFID tags use radio-waves, which can be sensed from a distance.  The trouble is, producing radio-waves requires power, and it would be inconvenient to attach a battery to every card.  That's where RFID tags get clever:

The card reader, which is attached to a power source, sends out a wave that gets absorbed by the RFID tag.  That wave carries enough energy to power a microchip that modulates how much is absorbed.  The reader then senses how much of the power it sent out is lost over time, giving the series of 1s and 0s needed to transmit information.

When I was growing up, and dreaming of being a scientist, one of my planned inventions (aside from my mother's "Beam me up" technology) was wireless power.  It seems I'm about 70 years late for that, but there's plenty more to discover!
Posted by Orion at 6:58 AM No comments:

This week's question comes from my nephew Ezra:


How come I have to push my arm out to move?

What you're experiencing is conservation of angular momentum.  Regular linear momentum is given by the mass times the velocity

This is why fast, heavy things are harder to catch than slow, light things – You have to overcome their momentum to make them stop.  Similarly, if you want to get something moving really fast, it pushes back on you to cancel out the momentum you impart to it.  Hence the recoil in firing a gun.

Angular momentum is the same idea applied to things moving in a circle.  The classic example is a figure skater spinning at different speeds, which I've mentioned before, but it applies here too.  When you push your arm out, part of that motion is going around the seat, so it has angular momentum.  That gets transferred to the seat, making it turn in the opposite direction.

Here are two experiments you can try: What happens if you hold your arm out and pull in, instead of pushing outward?  What happens when you push your arm towards the center of the seat, instead of to the side? 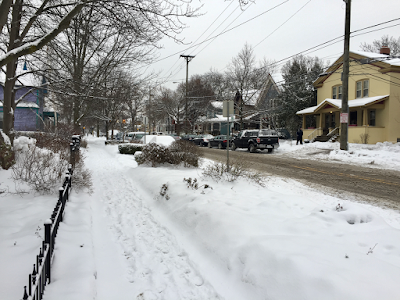 We've already had inches of snow building up in Ann Arbor, making it a little more difficult to get around, and it got me wondering about snow removal in a city.  For large snowfalls, there isn't really room for big piles, so the snow would need to be hauled elsewhere.  How much cheaper is that than melting the snow with, say, blowtorches?

Melting snow involves overcoming the latent heat of the ice crystals.  This is the energy contained in the crystalline structure – I've mentioned this property before in the case of candle wax.  If we assume the snow is already at the melting point of 0°C, then we still need 334 kJ of energy per kilogram of snow.

Figuring out the energy needed to move the snow is a little more complicated, since it involves converting the gas mileage.  Current semi trucks get about 6.5 mpg with diesel fuel.  Diesel engines are relatively efficient (though they produce nastier byproducts), converting about 45% of the chemical energy into mechanical work.  The final piece we need is the amount of energy in a given volume of fuel, 35.8 MJ/L.  Putting these together, we can find the energy needed to move a truckload of snow a given distance: 2.16 x 10^-5 miles/kJ.

The maximum weight this truck can carry is 80,000 pounds, so we can calculate the energy to melt that much, 1.21 x 10^10 Joules (not jigawatts, sadly).  So how far would we need to haul the snow to make it more efficient to melt?  26 million miles, or several trips to the moon and back, but only 1/5th of the way to Mars.

I wasn't expecting to have a breakthrough snow removal technique, but this does seem a little high.  It's possible I'll find a mistake later, so take these results with a grain of salt (yet another snow-removal method).

Not with a Bang

Another question this week from my grandfather-in-law-to-be, George: How does entropy work on the scale of the universe? Doesn't gravity reduce entropy by pulling things together?

Before I get into this, I should first explain what entropy is.  I've mentioned it before as a type of randomness, but it's a bit more complicated.  First, there's the idea of microstates and macrostates.  Imagine we have a box with 10 particles bouncing around inside, and we take a photo at two different times: 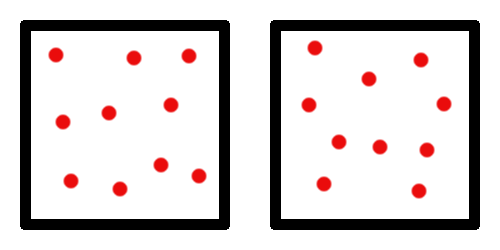 These look basically the same, even though the particles are in different places.  These are two microstates belonging to the same macrostate.  Now we take another photo, and find this: 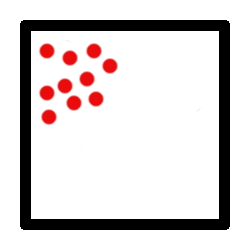 This is qualitatively different, and is therefore a different macrostate.  However, there are far fewer ways to put all the particles in one corner like that, so the number of microstates is much smaller.  Thermodynamics assumes that all microstates are equally likely, which is why we usually only see the macrostates that have many of them.

Entropy is a way of measuring how many microstates a configuration has.  It's defined as

where k_B is Boltzmann's constant, and Ω is the number of microstates.  The second law of thermodynamics says that entropy always increases in any process – In a way, it defines the progress of time.  A common example is a box with two gasses separated by a divider.  If you remove the divider, the gasses will mix, and there are astronomically more ways for them to be mixed than separated, so they will not return to the original state.

So now, back to the original question.  It seems as if increasing entropy would imply the universe would smooth out to an equal amount of matter everywhere, but gravity acts against that.  The key is that when gravity brings lots of matter together, you can end up with a black hole.  It is believed that black holes carry entropy proportional to the area of their event horizons, which in turn is proportional to the mass that has fallen into them.  Therefore by collecting matter, a black hole is not violating the second law.

That leaves us with a rather sad conclusion called the heat-death of the universe.  If entropy continues to increase, it will reach some maximum value, at which point the universe will be a uniform temperature at all points.  Differences in temperature are required to extract energy from a system, so heat-death implies that no processes can occur after that point.

Earlier this week, I was getting ready to do some baking, but noticed something strange when I set out my mixing bowl:

There appears to be some vibration in my apartment that the fork/bowl were picking up.  I shared the video on Facebook, and joked that perhaps a passing gravitational wave was responsible, but when I heard my nephew was interested, I decided to go a little more in-depth.

The reason the fork begins to rattle is that the vibration is near the fork's resonant frequency.  This is the frequency at which a system is best able to absorb energy.  This may sound complicated, but you already have experience with finding a resonant frequency if you've ever played on a swing-set.  The way you pump your legs, pushing forward and pulling pack, is exactly the type of motion I'm talking about.

As a physics student, I've had many opportunities to experiment with resonant frequencies in labs, and get a feel for how the different parameters interact.  I wasn't sure how helpful it would be to show you a few isolated examples, and I wondered how difficult it would be to design an interactive experiment in HTML5.  Thanks to the examples by Daniel Schroeder (who coincidentally wrote the thermal physics textbook I used a few years ago), I was able to put together a simple demo in a matter of hours!

The units are set up such that the pendulum's natural frequency is 1.  With no damping, this is the same as the resonant frequency, but adding damping brings the resonant frequency down.  I found (0.2, 0.3, 0.9) to be a good set, but the whole point is to play around a bit.  Be sure to leave a comment if you find a particularly interesting setting!

I was amazed how simple it was to make this in HTML5, so I may do more of these in the future.  If you'd like to take a look, I've put a stand-alone version here, so you don't need to go digging through the page source.