The third observing run for Advanced LIGO/Virgo starts Monday! That means I've been on many telecons making sure everything is prepared for the big moment. Unfortunately, when you have dozens of people on a call, someone will invariably forget to mute their microphone, leading to echos, or worse, feedback.

Feedback happens when an output, like speakers, gets fed back into an input, like a microphone. Typically, the point of a speaker is to amplify its input, so the output gets louder, which goes into the input, and comes out louder, and goes into the input... Eventually, the signal reaches the limits of either the input or output system, and things stabilize (or break). I was curious though, why feedback has its characteristic sound. White noise is so-called because it's an equal distribution across all frequencies, just like white light. Feedback has a specific tone because of the properties of microphones and speakers.

The sounds we hear are rarely single-frequency – They're usually spread over a range with different intensities. This is how you can tell the difference between two instruments playing the same note. Different shapes and materials have different harmonics.


Microphones on computers are designed to pick up human speech, which is mostly in the range 150 Hz to 4 kHz:
The x-axis of this plot is frequency, and the y-axis is intensity in decibels (dB). This is the typical unit used for measuring sound intensity, but it's a bit confusing. For one thing, it has the uncommon deci- prefix, meaning it is 1/10th of a bel (named after Alexander Graham Bell). It's also defined on a logarithmic scale:

where L is the loudness of the sound, p_rms is the average pressure of the sound wave, and p_ref is a reference pressure. Every 10 decibels corresponds to a pressure 10x greater.

Computer microphones are designed to pick up the same range of frequencies:
Notice though, there's a slight uptick around 5 kHz. We can compare that to the output of computer speakers,
This also rises around 5 kHz, which leads to the typical high-pitch – For reference, the highest note on a piano is around 4 kHz.

Of course, understanding how it works doesn't make it any less irritating!

I've often wondered when rinsing out a container, what the best strategy is to get it clean: Many rinses with a small amount of water, or a few with a large amount? 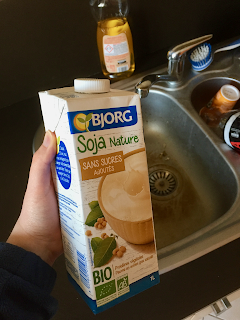 Every time I empty the container, there's a bit of liquid that stays due to surface tension. Then I fill the container again, lowering the concentration of the original contents, before dumping as much liquid as I can out. If I fill it to a volume V, and empty out all but a volume v, then after the first rinse, the concentration of the original liquid is

where ρ0 is the full concentration of the liquid. Each rinse applies the same factor, so after n rinses,

If we suppose that there's always the same amount left in the bottle, say 1%, we can try varying the other parameters to see how they relate. 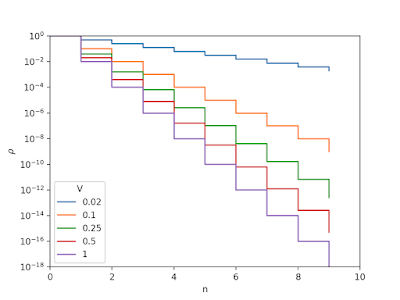 Each line represents an amount we fill the container, from 2% to 100%, and the x-axis represents the number of times we've filled and dumped. More interesting (for an eco-friendly person anyway) might be the total amount of water required to dilute the liquid to a specific concentration. The total volume is simply nV, so we can rewrite the equation above as

where ρ* is the target concentration. Plotting that looks like 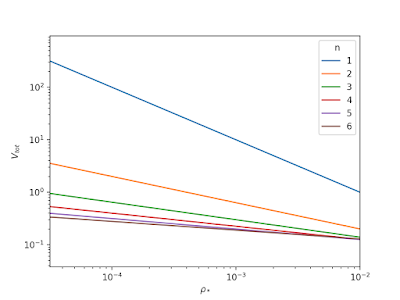 What this says is that if you're looking to save water, you just have to rinse a lot of times with a little bit!
Posted by Orion at 4:02 AM No comments:

A Hill of Beans

I missed posting last week, since the idea I had turned out to be more complicated than I thought, and I ran out of time. I thought I'd be able to finish it this week, but it's still giving me trouble. Luckily, my niece Vivian came to my rescue with a great question (as dictated to my big sister, Rachel):


Vivian has a question about refried beans. She helped me open the can and then tried to dump the beans into the pot. Of course nothing happened. She was delighted and confused when I punctuated a hole in the bottom of the can and the beans slide out in a perfect can shape and landed in the pot with a satisfying plop. What happened?

They sent along a picture to illustrate (and give Vivian an opportunity to mug for the camera): 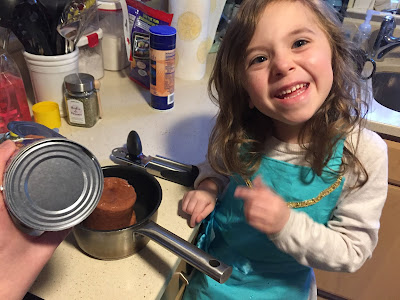 What we're interested in is the forces on the beans before and after the hole is punched. We can draw the ubiquitous intro-Physics free body diagram: 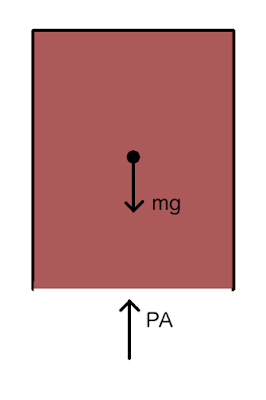 If we express the mass of the beans as a density, 𝜌, multiplied by the volume, which is the area times the height, we come up with

I measured a normal-sized can to be about 11 cm tall, so plugging that in with 1 atmosphere of pressure gives a density of about 94 g/cm^3. For comparison, we can look up some typical densities: water has a density of 1 g/cm^3, and even solid gold is only 19 g/cm^3! If the bar is as high as it is, how can we ever get something out of a can?

That brings us to the second part of the question: What difference does the hole make? The key is that the pressure is only acting on the outside – If any air gets into the can, the pressure will push from the top too, and cancel out the force from the bottom. Punching the hole lets enough air in to allow the beans to slide out. The only reason you even need the hole is that refried beans are both sticky and wet (which sounds like some great ad-copy, right?), so they stay in one piece, and don't allow air to enter around them. The same type of thing would happen with anything that stays can-shaped, like cranberry sauce, or pumpkin puree. The moment any air gets to the back of the can though, the forces cancel, and stuff slides out.

Thanks for a great question, Vivian! I hope you stay curious about the world around you – There's so much to learn!

The Party Cools of Stoan

(Title from the wonderful book Riddley Walker, which my father insisted I read when I first decided to be a physicist.)

I have another question this week from Papou: Can you explain gravitons? Wouldn't they need to escape black holes to work?

You may have heard about the discovery of the Higgs boson in the LHC a few years ago. The Higgs boson is responsible for giving some particles mass, and you may be thinking that it therefore mediates gravity, but the force of gravity is separate from the mass. I remember my middle school science teacher explaining it this way: Imagine you're floating in space with a big truck. You're both weightless, but you'd still be in trouble if the truck hit you, because it still has a lot more mass.


There's a problem when it comes to finding a particle to mediate gravity: the theories we use to describe small, slow things (like single particles) and big, fast things (like black holes) are incompatible. The areas of physics are often divided into four parts: 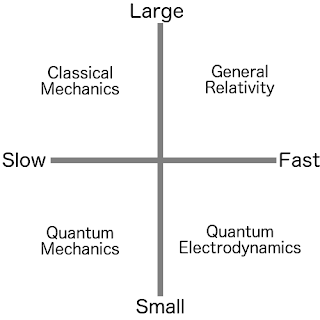 Each of these works very well in its own quarter, but trying to apply it to another region causes problems. Where relativity and quantum mechanics meet, quantum electrodynamics can cover some predictions, but it breaks down if you try to expand it to cover the universe.

There are various proposed theories of gravitons, including certain string theories, but since gravity is such a weak force, it's currently impossible to observe an individual graviton. Since photons are associated with electromagnetic waves, you might wonder if gravitons are behind gravitational waves. Unfortunately, this still wouldn't allow detection of a single graviton, since the waves are so weak. We can, however, hope to get more information about gravitons through gravitational waves. If the waves are observed to move slower than the speed of light, that would imply the graviton has mass. When LIGO and Virgo observed a binary neutron star merger, we were able to set limits on the speed of gravity: the difference is of order 10^-17! That suggests that the graviton is indeed massless, but as always, there's some experimental wiggle-room.

Now to the second part of the question: Do gravitons escape black holes? This is a bit difficult to answer, since we haven't observed gravitons yet. Black holes can emit energy via either gravitational waves, or Hawking radiation. That energy may take the form of gravitons, which would mediate the interactions between the black hole and surrounding bodies. Whether or not gravitons exist, and how they mesh with the rest of physics remains to be seen, but as I've said before physics is all about successive approximations: We've got a good system now, but later we'll make it a little bit better. Thanks for another great question, Papou!