In September of this year, I successfully defended my thesis, and received my PhD!
In the time since, I've been packing up to head to Annecy, France to start a post-doctoral position with the Virgo gravitational wave group, but now I'm here! I haven't found a place to live yet, but I'm settled into my job, and since it has fixed hours (unlike grad school) there's a chance I'll be able to post here regularly again!

I thought a good return post would be to take you through my thesis, and show you why I deserve to dress as a crazy space-wizard (thanks to KC for that comparison). In theory, graduate theses from the University of Michigan get posted to their server DeepBlue, but they're being slow about it, so I put mine on Google. Here now is a summary of what I've been up to for the past 4 years...

Gravitational Waves
A little over 100 years ago, Albert Einstein came up with an idea called the General Theory of Relativity, which is currently our best description of gravity. The theory says that mass changes the shape of the space around it, influencing the motion of other bodies. The picture I like to think of is a bowling ball on a trampoline.
What Einstein discovered was that his equations allowed for ripples in the fabric of spacetime that would propagate outward from certain objects. These are called gravitational waves, and while there had been indirect evidence of their existence, they were not directly observed until 2015, when LIGO made the first detection of a passing wave produced by a pair of black holes.

Detecting Gravitational Waves
The effect of a passing gravitational wave is to change the distance between points in space. This is commonly demonstrated by imagining a wave passing through a ring of mass:

As the wave passes through the screen, distances are compressed along one dimension and stretched along the other. In reality, the degree of squeezing is far smaller than shown above, so to detect these waves, we need to measure distances with incredible precision. The solution is a laser interferometer, the LI in LIGO. Interferometers are typically L-shaped devices that measure the difference in the lengths of the two arms. The LIGO Scientific Collaboration has build two such detectors in the US, in Hanford, WA and Livingston, LA. The arms of each device are 4 km (2.5 mi) long, but the strongest waves detected only changed the length by less than the width of an atom.


Sources of Waves
There are 4 main types of gravitational wave that are predicted:
The first type refers to pairs of black holes or neutron stars that spiral around each other and collide. All the detections made so far have come from this category, and it's the type I'll be looking for here in France (more on that in a later post). The second covers short-lived powerful waves which could result from a supernova. Stochastic waves are the sum total of all the gravitational waves hitting us, and could include effects from the Big Bang analogous to the cosmic microwave background. Finally, continuous waves are long-lasting waves from spinning neutron stars. These waves are significantly weaker than the CBCs and Bursts, but by adding up a signal over long periods, we hope to detect them.

Mock Data Challenge
The first search I was part of was a Mock Data Challenge, where fake signals were injected into real data, and the various analysis pipelines searched for them. Since continuous waves are yet to be detected, this is the best way to compare different techniques. I was part of a pipeline called PowerFlux, which emphasizes speed of computation. The main point of comparison is whether a particular injection is detected or not: 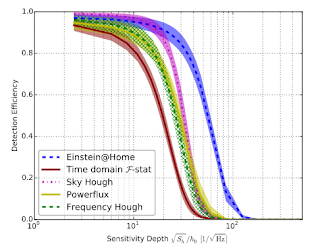 The most successful of the pipelines was Einstein@home, thanks to the computational resources they get from volunteers.

Advanced Detector Upgrades
Shortly before our first detection in 2015, upgrades to the detectors were completed, which greatly improved sensitivity. However, there were some isolated regions of high noise in the detector. 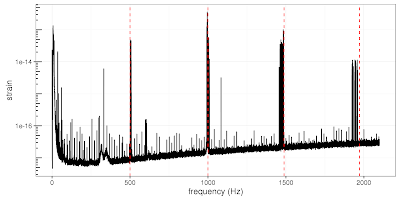 These sharp peaks are referred to as noise lines, and they are created by terrestrial sources. On the far left of the plot above is a large spike at 60 Hz due to the US power mains, and the four lines marked in red are called violin modes, the resonant frequencies of the cables that hold up the mirrors in the detector.

These lines are difficult to solve, since their sources are intrinsic to the function of the detector, but others can be solved if their source is removed. During the first observing run, there was a pervasive series of lines referred to as the half-hertz comb, appearing at 10.5 Hz, 11.5 Hz, 12.5 Hz, etc. Through extensive testing by people at the detector sites, it was discovered that this comb came from the GPS timing cards used in the equipment. The cards would indicate synchronization by blinking an LED on for a second and off for a second. This precisely-timed current draw was enough to interfere with the data collected. The cards have now been reprogrammed to stop blinking, but many lines remain. I investigated analysis techniques to mitigate the effect of these lines.

Barycentering Approximations
When making measurements, it's important to consider the frame of reference from which you make those measurements. Most physical laws only work in an inertial reference frame, meaning one that does not accelerate. Our detectors are on Earth though, which both rotates and revolves around the Sun. That means our measurements must be converted into an inertial frame, which requires knowing where the Earth is at any given moment. 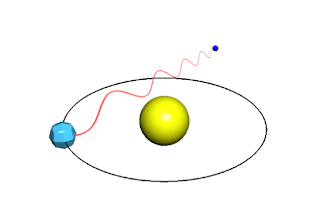 This process is called barycentering, and there are accurate techniques for calculating all the necessary parameters. However, this process can be slow when it needs to be done for every point in the sky, so I developed more approximate routines that allowed us to get "good enough" measurements in a fraction of the time.

I couldn't have done this without the help of so many people – In times like these, it's important to remember that we don't move forward alone. It takes a team to make real progress.