I haven't been posting here recently, since I've been busy with research, but the stuff I'm doing at the moment is a bit slow-moving, so I thought I'd stop in and give an update.  In February, I mentioned work I was doing on approximations to a piece of solar system dynamics code for LIGO.  I'm still working on it, and I wanted to talk about an interesting issue I just resolved.

The coordinates we use to specify a direction in the sky are called equatorial coordinates, given in right ascension and declination.  These correspond to taking the longitude and latitude at the spring equinox, and projecting them into space.  Since the coordinates are referenced to a specific position of the Earth, as the Earth moves the stars stay fixed in the coordinates, e.g. Procyon is always at 114.8° RA, 5.2° dec.  However, since this system assumes a fixed Earth, the planets and even the Sun will move around.  That means that as data is being collected from a source, the sun could cross the path and introduce the time delays I mentioned in the previous post.

Over a short time scale, say a week, the dominant frequency will be daily, due to Earth's rotation, but what kind of day?  The ones we're used to are called solar days, which correspond to the time it takes for the sun to return to the same position in the sky.  However, since the Earth is also moving around the sun, this is a bit longer than the time for the stars to return to their previous positions.  That period is called a sidereal day, and is about 4 minutes shorter than a solar day.

I tried fitting the parameters I need using these two frequencies, but comparing the fitted values to the data still showed some structure: 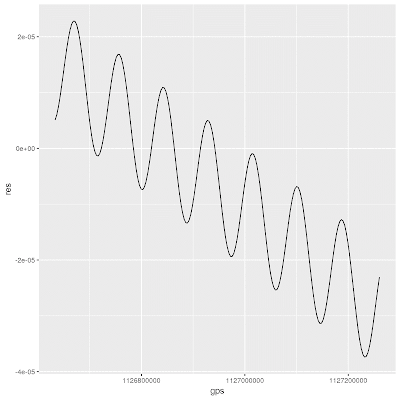 That plot of errors covers 1 week, so there's clearly something with a period of about a day, but not quite a solar or sidereal day.  That plot just shows a single point in the sky, but I also tried making a plot of the error over the whole sky, animated in time (a bit hypnotic, so don't stare too long):

I couldn't figure out what this other frequency could be, until my colleague Vladimir pointed out that it could be a beat frequency.

When two sinusoidal waves with slightly different frequencies are added, they result in a wave with a frequency related to the sum and the difference of the two original frequencies: 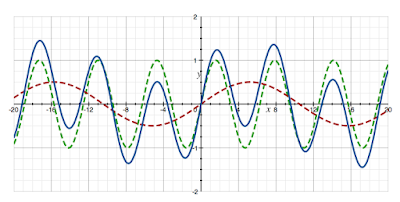 The blue curve is the sum of the red and green dashed curves.  Even though the red curve has a period much longer than the green, the resulting curve is only a little off from the original green.  Vladimir's suggestion was to add in the period of the moon, 27.3 days.  That resulted in this error curve: 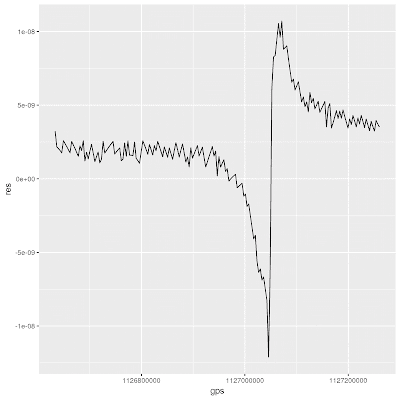 It's significantly smaller, and there are no more sinusoidal wiggles!  These barycenter approximations I'm doing will likely be a chapter of my thesis, so I'm pleased to be making good progress.
Posted by Orion at 1:47 PM No comments: