"A Temper That Never Tires"

Last week, I talked about how Marika was looking out for our health with fitness-tracking watches.  This week, I moved us in the opposite direction by making Valentine's Day truffles. 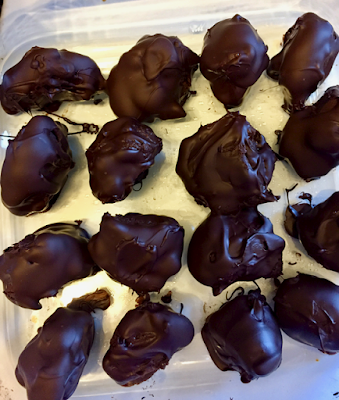 Like most chocolate candies, the recipe involves tempering the chocolate.  If you've ever melted chocolate, then let it resolidify, you may have noticed it doesn't go back to the crunchy texture you usually expect.  This is because only one of cocoa butter's six crystal forms has the properties we want.

Crystals are repeating patterns of atomic links.  Depending on the angles between these links, the crystals have different properties.  Here's a pair of examples: 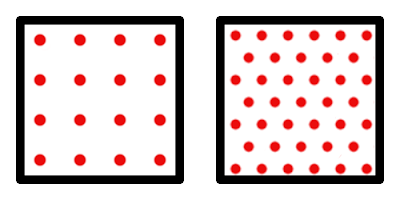 On the left is a square grid, while the right is triangular.  In addition to different angles, the atoms also have different numbers of neighbors, which can also affect the bonds.

Tempering chocolate involves heating it enough to break the bonds, then cooling rapidly to form the beta crystals that have the desired texture.  The method I use suggests adding some unmelted chocolate during the cooling process, which partly cools the mixture further, but it may also provide a starting point for the crystals.  Existing structures play a big part in how a crystal grows.

In the video below, the presenter drops a salt crystal into a supersaturated solution.  The presence of the crystal causes salt in the solution to precipitate out and join the structure:
My brother went to Vassar College, and every year at parents' weekend the Chemistry Department would put on a "Chemistry Magic Show" – This was always one of the features.
Posted by Orion at 12:30 PM No comments:

Through a Glass Magnetically

About a month ago, my wonderful fiancee bought us each an Apple watch, so we can keep track of our fitness goals.  To make the watch water-proof, the designers avoided any external ports for charging, which means the watch uses a type of wireless power transfer, which I've mentioned before.

The charging pad consists of a coil of wire with current running in a spiral.  The power is transferred thanks to the Maxwell-Faraday law:

The "∇ ×" is called the curl operator, and quantifies how much the current is going in a circle. The equation says that anytime you have an electric field going in a circle, you get a changing magnetic field in the middle.  This magnetic field can carry energy into another coil of wire in the watch, but there's a problem: The law applies to any material the field moves through.

Metal is a conductor, which means it has electrons that are free to move.  If the field passes by them, they'll start moving in a circle too, and absorb some of the energy. The amount the field is absorbed is quantified by the skin depth:

where ρ measures how easily the electrons move in the conductor, ω is the frequency of the electromagnetic wave, and μ tells how magnetic fields behave in the material.  Wireless power is usually transferred with a frequency on the order of 5 kHz, which for aluminum gives a depth of about 1 mm.  That may seem like a reasonable amount, but the effect is exponential – For every 1 mm, the efficiency drops by about 37%.

To avoid wasting power, Apple used a disk of glass on the back of the watch, allowing the waves to pass freely: 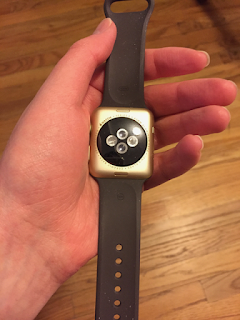 Initially, I had assumed the glass was purely for the heart rate sensor, but after reading the rumors that the next iPhone may have wireless charging, and therefore a glass case, I realized the true purpose.

This week, I thought I'd talk about some of the research I've been doing.  Lately I've been working on a suite of tools called LALBarycenter.  LAL is the LIGO Analysis Library, and Barycenter refers to the solar system's center of mass, the point around which the sun and all the planets revolve.  Contrary to popular belief, the sun is not quite the center of our solar system:
Calculating the positions of everything in the solar system and their effect on the incoming signal can be time-consuming, so we were interested in finding a faster, approximate method.

One of the important functions of this set of tools is to determine the time at which a signal was emitted from a source given its position relative to the Earth at the time it was detected.  This seems like it would be as simple as dividing the distance by the speed of light, but it's more complicated than that, thanks to something called the Shapiro delay.

As I described in my RELATE video, massive objects bend space and time around them.  That means that if a signal passes near the sun, it can end up traveling a longer distance: 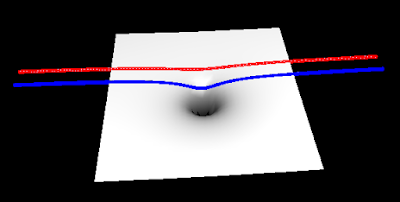 Because our measurements are so precise, we have to keep track of every deviation.  My hope is push the calculation to the edge of the required accuracy, while cutting down on the processing requirements.
Posted by Orion at 5:30 AM No comments: