This weekend I'm in DC for the "April" meeting of the American Physical Society.  I thought I'd try a sort of slow-motion live blog of the various talks I attend.  I'll be updating this page with my experiences.

Tuesday
Final day of the meeting!  The opening session was on black holes, and I learned some interesting things about black hole entropy (which I've mentioned before).  One of the presenters, Raphael Bousso, emphasized that "This is how we do physics in the US – We have collaborators all over the world," and showed this slide of his colleagues: 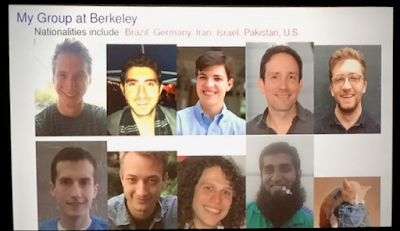 (The cat was a stand-in for someone he couldn't get a photo of).  Bousso had a few other quotes I enjoyed:


Physics is the process of describing more and more phenomena with fewer and fewer laws.

Put tea in the fridge, it cools down, while the fridge releases heat and increases entropy.  Same thing happens when you throw the tea in a black hole

I went by the "Contact Congress" booth and sent a copy of the APS letter to my congresspeople – I'm not sure how much effect it will have, since they're all Democrats, but at least they know we're behind them.

I gave my talk in the final session of the day, and it went great!  I got some nice suggestions for future directions from the crowd.  In the same session, someone spoke on using machine learning to identify "chirp" signals in LIGO.  He opened by saying, "Machine learning is not just a plot by Amazon and Google to take over the world.  It's also a data analysis technique."

I had a great time out here, and learned a lot, but I'll be glad to head back to Michigan tomorrow and get back to work on my PhD!

The other day, I happened to glance through the peephole of Marika's apartment into the building's lot: 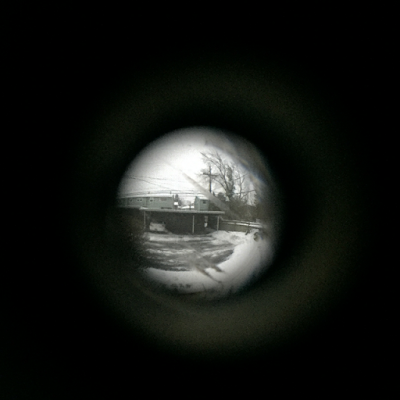 It got me thinking about the wide, but distorted image you get from them, and I thought I'd talk a bit about the optics behind it.

Lenses use refraction to bend light in specific ways.  When a beam passes from one material to another, it changes direction according to the properties of the two substances.  The angle of the change is determined by Snell's law (diagram from Wikipedia): 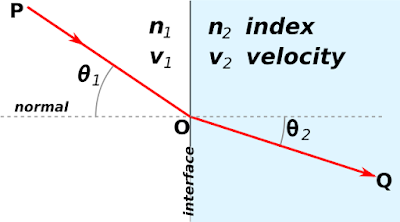 I've mentioned refraction before, in the context of the Principle of Least Time.  The general rule for refraction is that when a beam passes from a material with lower index to higher index (like air-to-glass) the beam bends toward the perpendicular, and when it passes from higher to lower index, it bends away.

Peepholes use a type of fisheye lens to gather lots of light from the outside, and focus it into a smaller area that can enter your eye: 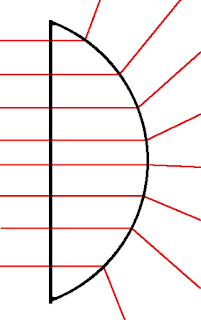 At the same time, if you try to look from the other side of the door,  all the light from a small spot gets spread out: 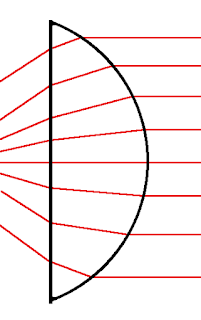 That makes the lens essentially one-way, allowing you to see outside, without others seeing inside.  It seems strange to me that we call something designed for privacy and security a "peephole" when the other uses of "peep" I can think of (outside of Easter) are so salacious: "peepshow" and "peeping Tom".  I suppose that's why I'm sticking to physics!

I'm currently reading a book suggested by my brother called House of Suns.  It's about an interstellar civilization divided into familial factions with an uneasy peace.  A recently-read portion concerned the funeral rites of a character from one of the families.  The deceased is raised into the air by a platform,


Not long after, [redacted] reached space and the platform tilted to release [them] for [their] long fall back to Neume's atmosphere.  We watched as [they] scratched a line of glorious fire across the sky...

This passage gave me pause, because I thought I recalled that Felix Baumgartner's record-setting 2012 skydive was technically from space.  It turns out his dive was from 39 km above the surface, while space is defined to begin at the Kármán line, 100 km up.

Aerodynamic heating is caused by the friction between an object and the air it passes though, and is proportional to the object's kinetic energy, given by

where m is the object's mass, and v its velocity.  We can consider how much extra energy something would have after falling from 100 km to 39 km from the gravitational potential energy

where g is the acceleration due to gravity, and h is the distance fallen.  Using the average human mass of 62 kg, the extra energy picked up is 37 megajoules.  In the absence of atmosphere, that would produce a speed of about 2,400 mph, exceeding Mach 3 (once there was enough air for the speed of sound to be meaningful).

The density of the atmosphere drops off quite rapidly, so this may not be such a bad approximation: 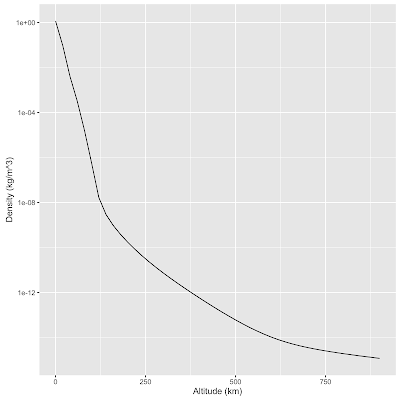 It certainly seems that those extra 61 km make all the difference.  I suppose I was taken in by the marketing of Baumgartner's "space jump" that, while impressive, was nothing of the sort.