I'm finally settled here in my new home of Ann Arbor, MI, although last night I lost power in a large thunderstorm, and it's not due back until Monday night.  I'm sitting in a local coffee shop with nothing much to do, so I figured I'd end my silence here by talking about an interesting feature of my new apartment.

I've found that the floor where I have my computer desk is slightly sloped, which sometimes causes my wheeled office chair to drift away from the table.  What's interesting is that it only happens under certain circumstances.  In order to roll back, the wheels must be pointed close enough to the direction of the slope that gravity, the force rolling it down the slope, can overcome the rolling friction created by imperfections in the wheels and the floor.

Using this, the force exerted by gravity is

where m is the mass of the chair (plus anyone in it).  Frictional forces generally depend on the normal force between two surfaces.  In this case, that's

Plotting these together as functions of φ gives something like 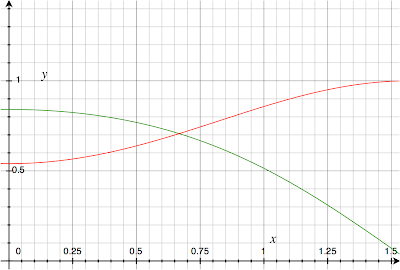 With luck, my power will be back on sooner than scheduled, but I'll try to keep posting regardless...