Lately I've been watching the anime series One Piece, about a man named Monkey D. Luffy who wants to be the Pirate King.  In the story's world, there is something called Devil's Fruit, which gives those who eat it different supernatural abilities.  In Luffy's case, it made him a rubberman, giving him the ability to stretch his body as if it were made of rubber.  I won't get into the details, but in the episodes I've recently watched, Luffy ended up with one arm encased in a giant gold sphere, leading to this scene: 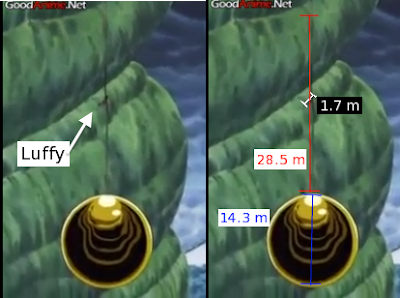 Since it's a little hard to see out of context, Luffy is holding onto a beanstalk with one arm, while the one with the gold dangles below.  I decided it was the perfect opportunity to see how stretchy Luffy is.

First, I needed to figure out the scale in the picture above.  The white line shows Luffy's height, which I assumed to be the average male height in Japan.  Using this, I found the distance his arms stretched (red) and the diameter of the sphere (blue).  From this, we can calculate that the sphere has a volume of about 1500 cubic meters.  The density of gold is about 19 grams per cubic centimeter, so the sphere weighs 29 million kilograms.

Of course, using Hooke's Law is an approximation, since rubber has some unusual stretching properties.  The polymers that make up rubber are best modeled with statistical mechanics, where temperature and entropy play significant roles.  If you're interested, this is a nice explanation.
Posted by Orion at 5:44 PM 1 comment: