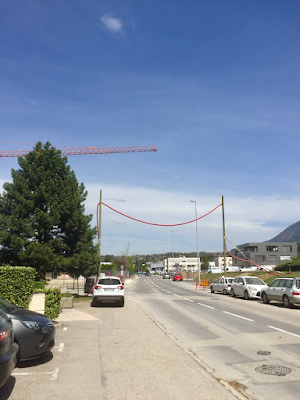 My coworkers and I go to a cafeteria for lunch every day, and along the way we pass under this large length of hose draped over the road. Every time, it reminds me of the classic physics problem: What shape does a massive (as opposed to massless) rope make under the force of gravity?

You might imagine it would be a parabola, since that's the shape of a projectile trajectory under a constant force. It turns it it's a similar, but slightly different shape called a catenary. The equation is

where a is a constant that depends on the mass of the rope. Over a short distance, it's fairly close to a parabola, but diverges as it gets away from the minimum:
If you look at the Wikipedia link up there, you can see a derivation based on the forces on the rope, but it gets a bit involved. Often in cases like this, it's easier to consider the energy of the system. Given enough time, any system left alone should eventually reach a minimum-energy state. In this case, the only potential energy involved is gravity, which has a simple form near the surface. For each little bit of mass dm, we can write

If the mass is evenly distributed along the rope, we can write it in terms of the density, λ:

Here's where it gets complicated though. Now we need to express the length of a little bit of the rope in terms of x and y,

Putting all that together gives the total energy,

Unfortunately, I can't find any way to solve this, let alone minimize it. It seems this is a case where it's best to stick with forces.

This past week, I flew back to the US with Marika and Lorna to visit family. I'm back in France now, but the jet lag I've been suffering from has put timezones on my mind. The idea behind timezones is pretty simple: We use time (meaning the value read on a clock, not the duration between two events) to measure the progress of a day, which is connected to the rotation of the Earth. Every point on the Earth has a different angle with relation to the Sun, so in the most precise sense, every point has a different time. That would make things difficult to keep track of though, so instead we divide the planet into zones, usually every hour.

It would be inconvenient to simply draw straight lines though, since that might put a small corner of one state or country in a different zone from the rest, so instead we define the zones to follow borders:
Some of these are pretty misshapen, and it made me wonder about the extremes in the difference between position on the planet, and designated local time. I found there are a number of handy Python packages for dealing with timezones, so I put together a script to get some statistics.

The main thing I wondered was in which timezone was it possible to get the farthest from the "true" time, determined by the rotation of the Earth. This is equivalent to the zone that covers the greatest longitude. When I tried to get that with my script, it gave me Antarctica, which has a timezone covering the full 360°! That's not really an answer to my question though, so I had it exclude points in the Arctic/Antarctic circles, where there can be 24 hour days/nights. With that done, I found the widest timezone was UTC+1, covering Ireland, parts of Africa, and importantly, Iceland, which gives it the extra width to beat China, at least measuring by angle. The northern latitude of Iceland means there's less distance in every degree of longitude. This timezone is nearly 45°, or 3 hours wide.

The narrowest zone, on the other hand, is UTC+6.5, covering the Cocos Islands. If you zoom in on the map above, you can see it just above the label for the Indian Ocean. That zone spans just half a degree, or about 2 minutes. It made me curious though about timezones that don't fall on an hour. The full list is America/St_Johns, Asia/Colombo, Asia/Kabul, Asia/Kathmandu, Australia/Broken_Hill, Australia/Eucla, Australia/Lord_Howe, Indian/Cocos, and Pacific/Chatham. I was surprised not to see North Korea on this list, since I thought I remembered they had a 30-minute offset, but it turns out they just got rid of that last year.

I'm still a bit jet-lagged, so I'll stop here, but if you take a look at the code you can see an attempt to find where you can get the biggest time change in the shortest distance (and maybe fix it yourself).
Posted by Orion at 5:13 AM No comments:

I Case My Rest 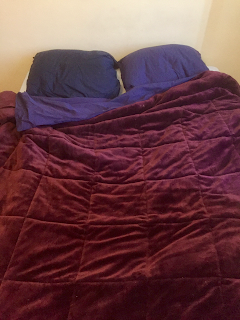 Since moving to France, I've noticed many small cultural differences. Among the more unexpected is the shape of pillows here – They're square, rather than rectangles. It might seem like this is irrelevant to getting a good night's sleep, but it actually changes the way the pillow inflates, and initially I found it incredibly uncomfortable. I was curious if I could find a way to model how the different dimensions lead to different pillow shapes.

It turns out this is a well-studied problem, usually called the paper bag or teabag problem. Unfortunately, it's a problem with no simple solution. There are approximations of the total volume contained, but I was more interested in the shape of the pillow. That can be modeled with a computer program, but I failed in my attempts to get that one to work.

However, the original post on that page suggested a different way to make the comparison – Inflate some paper bags myself! The French pillowcases are 65 x 65 cm, and according to this site, American ones are 20 x 26 in or about 51 x 66 cm. I cut out 1/5 scale replicas of the two sizes, and blew them up as best I could: 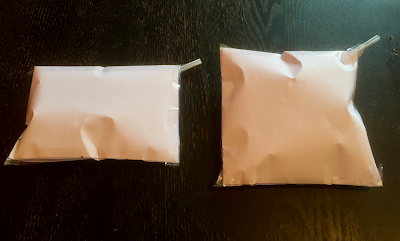 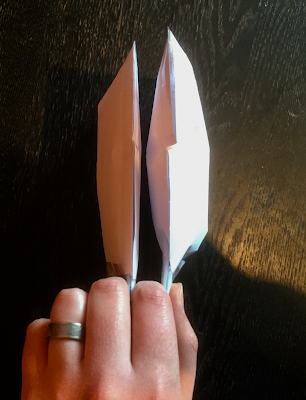 The area for the French pillows is only about 25% larger, but this leads to much thicker pillows! It seems after a few months here, my spine has reshaped itself, and I'm sleeping much better now. Still a funny bit of culture shock though.
Posted by Orion at 2:35 AM No comments:

[Title thanks to The Simpsons]

My brother-in-law Dave Willett sent me an op-ed from the Tennessean titled "Primary cause of global warming is force of gravity". Normally I hesitate to comment on science outside my expertise, but by attributing climate change to gravity, the author has brought this into my wheelhouse.

What's dangerous about this piece is that it mixes accurate information with unsupported conclusions. I thought the best way to tackle it would be a running commentary.

Climate change throughout planet earth is occurring and is observable, measurable, provable and, most importantly, unavoidable. Through numerous empirical methods the inexorable warming trend is being monitored and documented by researchers throughout the world. Thus mankind's influence on weather patterns and global warming is minuscule compared to the colossal heat-producing forces within the earth itself.

The main thing that bugs me about this passage is "thus". It suggests that the first part is in any way connected to the second, when in fact mankind's influence is painfully clear:
Each line represents a different temperature-recording technique. Notice the massive uptick during the 19th and 20th centuries, strongly correlated with the advent of industrialization. This plot alone contradicts the author's thesis: Warming from the Earth's mantle would be a constant effect, with no connections to human history.


[...]
The earth itself is a heat-generating machine and is gradually warming, as is virtually every other planet, star and asteroid in our universe. The primary cause of this increase in global temperature is purely and simply the force of gravity. Due to the ubiquitous, ever-present force of gravity, our earth is gradually and inexorably shrinking. The force of gravity at the earth's surface is 9.80 m/sec/squared and increases greatly as it is measured closer and closer to the center of the earth. Gravitational pull increases the internal pressure in the earth itself and thus increases the internal temperature.

There's a lot wrong here, but one thing that's (almost) correct: The acceleration due to gravity is 9.8 meters/second^2 at the Earth's surface. Newton's Law of Gravity states

where a is the acceleration from gravity, G is Newton's constant, r is the distance to the center of mass, and M_enc is the total mass enclosed in that radius. If you plug in the radius and mass of the Earth as a whole, you will indeed get 9.8 m/s^2. However, as you descend into the Earth, not only will r get smaller, but so will M_enc. If the mass is equally distributed in a sphere, then the mass enclosed at a certain radius will be a ratio of the volumes:

where M_tot and R are the total mass and radius of the Earth, respectively. If we plug this into the equation above, we find as you descend into the Earth, the acceleration actually decreases:

This makes sense if you imagine being in the exact center of the Earth: Which way is gravity pulling you? The Earth is symmetric around you, so there can be no preferred direction, and the acceleration must be zero. It is true that the rest of the Earth is pushing in on you, creating pressure and heat, but that brings us to the next part.

Radiation of heat is an important point for climate change. Normally, heat created by the planet is radiated into space. The excess of CO2 and other greenhouse gasses, however, reflects this heat back to the surface. From here the author goes into effects of tectonic shifts, which I won't get into, because that's not my area of expertise!

The author emphasizes the dangers of climate change, which is a great position to have, but without understanding the causes, it's impossible to arrive at a solution. As much as I mourn the decline in society's evaluation of science, worse is the misuse of science to arrive your own desired conclusion.