In France It's "Quantum Royale"

Earlier this week, Google announced it had achieved "quantum supremacy", so I thought I'd discuss a bit about what quantum computing is, and what Google managed to do.

Quantum computers have quantum bits, or qubits, which represent entangled particles. That means the states of different qubits can depend on each other, and they can (temporarily) take on values between 0 and 1, representing a superposition of the two. This can be exploited to perform calculations exponentially faster than a classical computer could.

One of the exemplary problems where quantum computers are useful is prime factorization. This is the problem of finding all the prime numbers that divide a given number, which you can imagine as a tree:
Typically, this is done by trying each possible factor, until we find one that divides the number, and then repeating for the results. In essence, quantum computing lets us try all the possibilities at once, and only keep the ones that work. The actual algorithm is a bit more complicated, but we're just skimming the concept here.

Why should we care about factoring numbers? Current encryption algorithms are based on the product of two large primes. You share the product, which others can use to encrypt a message for you, but the only way to decrypt it is to use the individual factors, which you keep secret. With quantum computers though, anyone can factor the product you gave them, and read your messages.

Google published a paper in the prestigious journal Nature claiming to have reached "quantum supremacy" (the originator of the phrase now regrets choosing it). The trouble with quantum systems is that they're fragile – Any disturbance from outside the system will affect the states of the qubits, invalidating the calculation. This risk increases with the number of qubits, so the question becomes, can we maintain the integrity of a system with enough qubits to be useful?

Quantum supremacy refers to the point where we can build quantum computers with the necessary number of qubits to do calculations that are impossible on classical computers. Google claims to have reached that point, with their 53-qubit Sycamore computer. They solved a problem in 200 seconds that they say would take a classical computer 10,000 years. IBM disputes this calculation, claiming that the classical computer would only take a few days.

It remains to be seen who is right, but it's still cool to see a project with such world-changing potential coming into being.
Posted by Orion at 4:25 AM No comments:

This week, I got some great questions from my nephew Ezra, along with his parents Nate and Carrie. I gave them some quick answers off the top of my head, but I thought they deserved a more in-depth treatment as well.

Ezra: What does a gravity wave feel like [to a person]?
As a reminder, gravitational waves warp space as they pass. If a wave passed through the center of a hula-hoop, it might look like this:

Gravitational waves are incredibly weak, which is why we need 2.5 miles of detector to pick them up. They’re a squeezing and stretching of space, so if you could feel them, they’d be a combination of a hug (awww) and a medieval rack (ahhh!). Some of the early detectors were big pieces of tuned metal that scientists hoped would ring like a xylophone if the correct frequency passed by. Those were never sensitive enough though.

Nate: But aren't they weak because they're distant? What if you were closer to a pair of black holes approaching collision? Could you be close enough to feel the waves but far enough to not be inside?

Good point! We can take the first LIGO detection, GW150914, as an example. According to that paper, the distance was about 410 megaparsecs, and the peak strain was 10^-21. Strain is the fraction by which the wave changes distances, so a meter stick would be stretched and squeezed by 1/1000000000000000000000 meter! That's pretty tiny, but strain drops off as 1/distance, so we can get a bigger effect closer to the collision. We probably don't want to be inside the event horizon of the final black hole, which has a radius of

Plugging in the 62 solar masses from the paper, we get 183 km. Supposing a 6 ft person observed the collision from 200 km away then, their height would change by a little over 4.5 inches!

Carrie: Is a black hole a hole in space-time or a depression?
It's both! -ish. This is a difficult question to answer, since the whole point of a black hole is that we don't know what's going on inside it. The trouble is that when a star collapses into a black hole, it creates a singularity – a point of infinite density. That creates a lot of problems for General Relativity, since things falling into the singularity could wind up going faster than light, and other bad things that happen when you have an infinite quantity. Instead, we put an event horizon around the singularity at the point where light can no longer escape from it, which is usually where bad stuff starts. Wikipedia has some nice representations of a singularity with and without an event horizon (bad stuff not included):
Thanks for some great questions!
Posted by Orion at 12:52 AM No comments:

Last weekend, I was making another batch of my friend Jean's dosa recipe, and I started thinking about the whirlpool in my blender:

I was curious if I could figure out the shape of the well, and how it depended on the speed and ingredients.

The basic idea is that we have water molecules with some angular momentum, rising to some height h based on the distance from the center, r. If we ignore drag/viscosity, we can just set the rotational energy equal to the gravitational energy:

where ω is the angular velocity, and m is the mass. Solving for h gives

This has a parabolic cross-section, which is characteristic of a rotational vortex, according to Wikipedia.

Really though, there's some drag on the liquid: It's moving quickly in the center, where the blades are, but at the walls it has to slow down. I looked at the models for viscosity of liquids, and I was hopeful I could find a way to apply it here:

F is the force between one sheet of liquid and the next, 𝜇 is a constant that depends on the liquid, A is the area of the liquid, and v is its rotational speed. In our case we can write

I was hoping I could solve this, with an input velocity at the center, and an output velocity at the outside, but I'm not sure what to do with the time derivative. Looking at the photo up there, I'm inclined to say a parabola is good enough, unless one of you readers can suggest a way to solve this!
Posted by Orion at 11:48 PM 1 comment:

My parents are in the process of installing a set of heat pumps in my childhood home, so they don't have to rely on the old wood stove, which requires buying, stacking, and splitting large quantities of lumber every year. I was interested to learn more about these real-world pumps, since physicists are introduced to the idea of heat pumps and heat engines in any intro thermodynamics class.

Usually these different stages the pump goes through are shown on a p-V diagram, which shows the relationship between pressure and volume at each step. Here's a simple example: 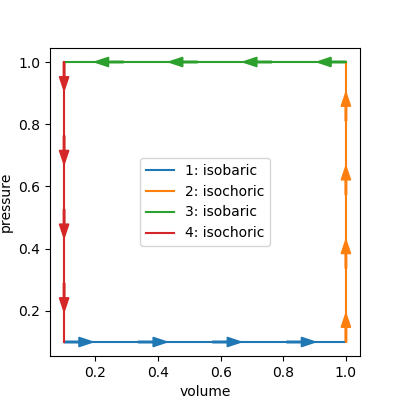 
The reason physicists like to represent this in terms of pressure and volume is that it's easy to find the energy:

This says that the energy produced by the system is equal to the area under each curve in the plot above. This is where the arrows come in: pointing to the right means the volume is increasing, and dV is positive, while to the left is negative. How does this relate to temperature though? If we're using an ideal gas (air is close), then these factors are related by

so in the plot above, the upper right corner will be the hottest, while the lower left will be the coolest. Since the arrows are to the left at the higher pressure, we put in more energy than we get out, and this is a heat pump that will make that temperature difference.

What's really interesting about heat pumps is their efficiency: The amount of energy you get out (through heating/cooling), divided by the energy you put in (turning the shaft). In the case of an old fashioned electric heater, you run current through a big piece of metal, which heats up, converting 100% of the input energy into heat. It seems odd that you could do better than 100%, but heat pumps manage it.

The key is that we use ambient energy, which doesn't count against our input. In my parents' case, the pump is taking energy from the cold outside, and moving it to the warm inside, so the efficiency is

where Q is the energy exchanged with each location.

When physicists talk about efficiency, we like to bring in the Carnot cycle, which is the theoretical maximum efficiency. The p-V diagram for this case is a bit funny looking: 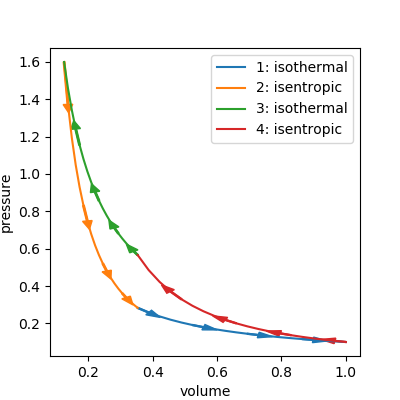 For this type of pump, we can replace the energy in the efficiency equation with the indoor and outdoor temperatures, in Kelvin. According to Steve's last NOAA report in 2012, the lowest recorded temperature in Ashfield was 249 K. For an indoor temperature of 293 K (brisk for my taste, but I'm sure he would prefer cooler), the efficiency comes to 666%! Clearly these heat pumps are the work of the devil...
Posted by Orion at 10:54 AM No comments: