Not Quite "Beam Me Up"

Last month, a group from Calgary announced they had broken the record for quantum teleportation over fiber-optics, so I thought I might talk a bit about the idea of quantum entanglement.

One of the main concepts behind quantum mechanics is that every particle has a set of states that can be measured.  It's possible for a particle to be in a mixture of several states, but once you measure a property, it "collapses" into a single state.  This idea is usually introduced with the property of spin, which you can think of as an arrow pointing out of the particle.  We can detect this spin with something called a Stern-Gerlach apparatus, which you can think of as a box with one input, and two outputs: 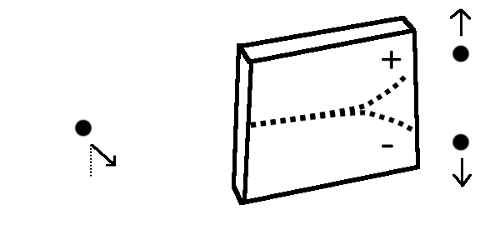 The two outputs tell you whether the spin is aligned with the angle of the box (+) or opposite the box (–).  If the particle goes in sideways, as shown above, then there is a 50% chance of it coming out each port.  However, when it comes out, it will have changed its spin to straight up or down, and all information on its previous sideways state will be lost.  In quantum mechanics, the initial sideways state is described as a superposition of the + and – states of the box: The particle is literally in both states at the same time.

Entanglement refers to two (or more) particles whose states depend on each other.  In the framework we've been discussing, we could imagine a device that puts out pairs of particles that have opposite spin.  Once we measure the spin of one, we immediately know what the spin of the other is.  This instant change of state for the unmeasured particle is called quantum teleportation.  If we put one of the particles in the box above, and it came out +, we would immediately know that the other particle was aligned opposite the box, no matter how far we had separated the two particles before making the measurement.

The idea of the new state being transmitted instantly over a great distance might worry you, since that would appear to be information traveling faster than light, which Einstein showed was impossible.  However, the state the two particles end up in is still random, even if they're guaranteed to be opposite each other.  The only way to observe this correlation is by comparing the spins conventionally at sub-light speeds.