We've been having a heat wave the last couple weeks in Annecy, and Marika and I were discussing the lack of air conditioning here. In spite of that, some buildings remain reasonably cool. Marika, being both an observant nurse and coming from a family of engineers, noticed that most buildings here are made of concrete, rather than the wood/steel buildings we have in the US. While talking to Papou a few nights ago, we mentioned this, and he identified them as Trombe walls.

Trombe walls consist of a concrete bulk, with a layer of glass or reflective coating on the outside.
The key is that UV rays from the Sun are able to pass through the glass and get absorbed by the wall. The wall heats up, which releases infrared light, but these are reflected by the glass, and remain inside. We can see this looking at the spectral reflectance:
Ultraviolet light has wavelength around 0.4 microns, the left edge of this graph, and infrared light is anything from 0.7 microns to 1 mm, beyond the right side of the graph. You can see that in between, the glass goes from mostly transmitting, to mostly reflecting. This means that the UV light will get in, but the re-emitted IR light will be reflected back.

It isn't all about the glass though: The concrete provides a large mass to store the heat when it comes in, and acts as a buffer between the inside and outside. I had hoped to make a simulation of this, but my concept of what happens is that as the weather outside heats up in the day, and cools down at night, those changes are transmitted inside with a delay, as the concrete absorbs and re-emits the heat. That results in the inside being cooler during the day, and warmer at night.

Air conditioning will still cool things better than this method, but this has the advantage of being more eco-friendly. I didn't expect international living to inspire blog posts, but thanks to Marika's observational skills, I've learned something new!
Posted by Orion at 5:51 AM No comments:

LIGO recently released a new public page showing a summary of all the alerts from the 3rd Observing run so far. The page includes maps showing the estimated sky location of each event. This one comes from just this past Friday night:
Seeing it reminded me of a question my father Steve had way back in 2015 after our first detection: Why do the regions have that funny banana shape?

At the time, I couldn't give him a good answer, since I had just started in the collaboration and didn't grasp all the details of the complicated matter of localization. At LAPP though, it's been a big part of my work, and I even gave a presentation on it a couple weeks ago at SFP. The simple answer to Steve's question is, they're not a funny banana shape, they're rings!

It's easier to understand this if you look at the image for GW170817 I showed last time:
Each detector contributes a ring on the sky, and the overlap of those rings gives the estimated location of the wave source. The problem becomes showing data that lies on a sphere, on a flat surface like a computer screen instead.

Cartographers have been dealing with this issue for centuries in trying to show the surface of the Earth on a flat map. This is difficult because the geometry of a sphere is fundamentally different from a plane. The surface needs to be unravelled, or projected, in a way that introduces distortions. A common representation for the Earth is the Mercator projection:
The problem with this is that areas near the poles are exaggerated, which results in Antarctica appearing to be almost as big as all the other landmass. This projection was designed for navigation, because a straight line on this map will always have the same angle with longitudinal lines – "lines of constant bearing", or loxodromes ("Two bagels enter, one bagel leaves!").

There are many, many different map projections, but the main one we use is called a Mollweide projection. This is designed to preserve the area of regions on the sky, while allowing distortions in the shape. That's important for multi-messenger astronomy, since it allows our EM partners to assess how much sky they need to search to find a companion signal.

Python's matplotlib includes the Mollweide projection, as well as several others, so I put together some code to show what it looks like when two rings with slightly different centers (like Livingston and Hanford) intersect on the sky. The first set of plots show the full rings, while the second set show their intersection, similar to how the LVC estimates source locations. 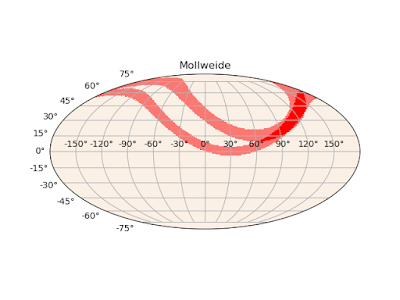 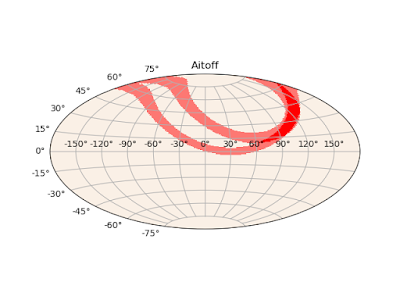 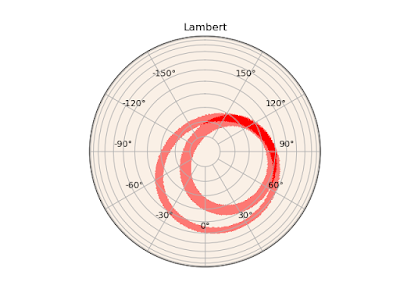 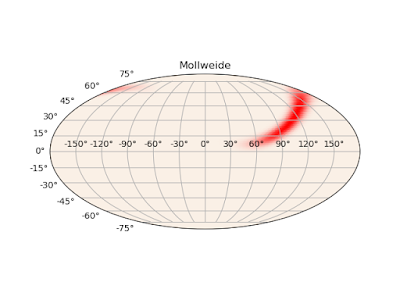 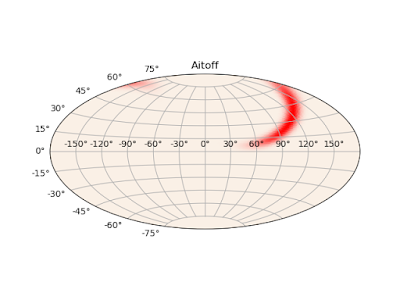 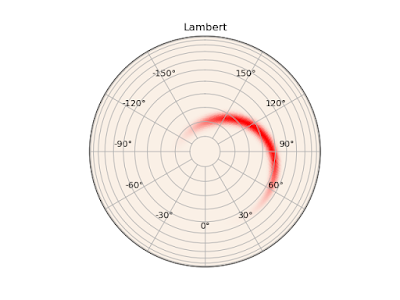 Thanks for a great question, Steve! I hope I can get around to others in a more timely fashion.

This week, I was at the 25th General Congress of la Société Française de Physique, or SFP 25. One of my coworkers from LAPP was chairing a session there, and asked me to present my work on localizing gravitational wave events. A lot of the talks were in French, but not nearly as many as I expected. In fact, several of the plenary talks were in English, and each time there was one audience member who seemed to be lodging a complaint about such a choice at the Society of French Physicists, though I can't be sure exactly what he said, since it was in French. I thought I'd tell you about some of the talks I attended.

The conference covered all areas of physics, but I tried to choose sessions closely related to my work. The first one I went to was about an object called Sagittarius A*, named for being inside the constellation. It emits strong radio waves, and is near the center of the Milky Way, leading astronomers to believe it's the supermassive black hole that our galaxy rotates around. All spiral and elliptical galaxies are believed to have black holes at their center. Sagittarius A* produces light as matter falls into it, but the optical range is blocked by dust clouds between Earth and the galactic core. The radio waves make it through though, allowing astronomers to study the black hole.

My session came on the second day, and was focused on multi-messenger astronomy. This refers to combining observations from traditional electromagnetic telescopes, and gravitational wave detectors. I was talking about how we localize gravitational wave signals on the sky, so that astronomers can point their telescopes in time to catch other parts of the signal. The main example I used was GW170817, our first binary neutron star detection. We were able to narrow the source region on the sky using information about the three detectors:
With only a small region to search, astronomers were able to find a burst of gamma rays, a type of high-energy photon that was predicted to result from neutron star mergers. The talk was well-received, and I was approached at lunch the next day by someone who had followup questions.

My favorite session was about a physics perspective on the origins of life. One of the topics discussed in that session was the Miller-Urey experiment, which sought to demonstrate how some of the prerequisite amino acids could have been created in the environment of the early Earth. The reason I enjoyed it so much? Similarities to the work of the esteemed V. Frankenstein, of course!
The researchers combined water vapor, methane, ammonia, and hydrogen, all believed to be present in Earth's atmosphere around 4 billion years ago. Then they ran a current through the mixture, simulating (though probably not using) lightning, and collected the results. Analysis showed the presence of a significant number of the amino acids present in lifeforms.

The sessions entirely in French were a bit of an ordeal for me, but overall I'm glad to have had the opportunity to go. Along with the conference, Marika found many wonderful museums and historical sites in Nantes. We're both still exhausted, but we have a lot of great memories!
Posted by Orion at 4:05 AM No comments: